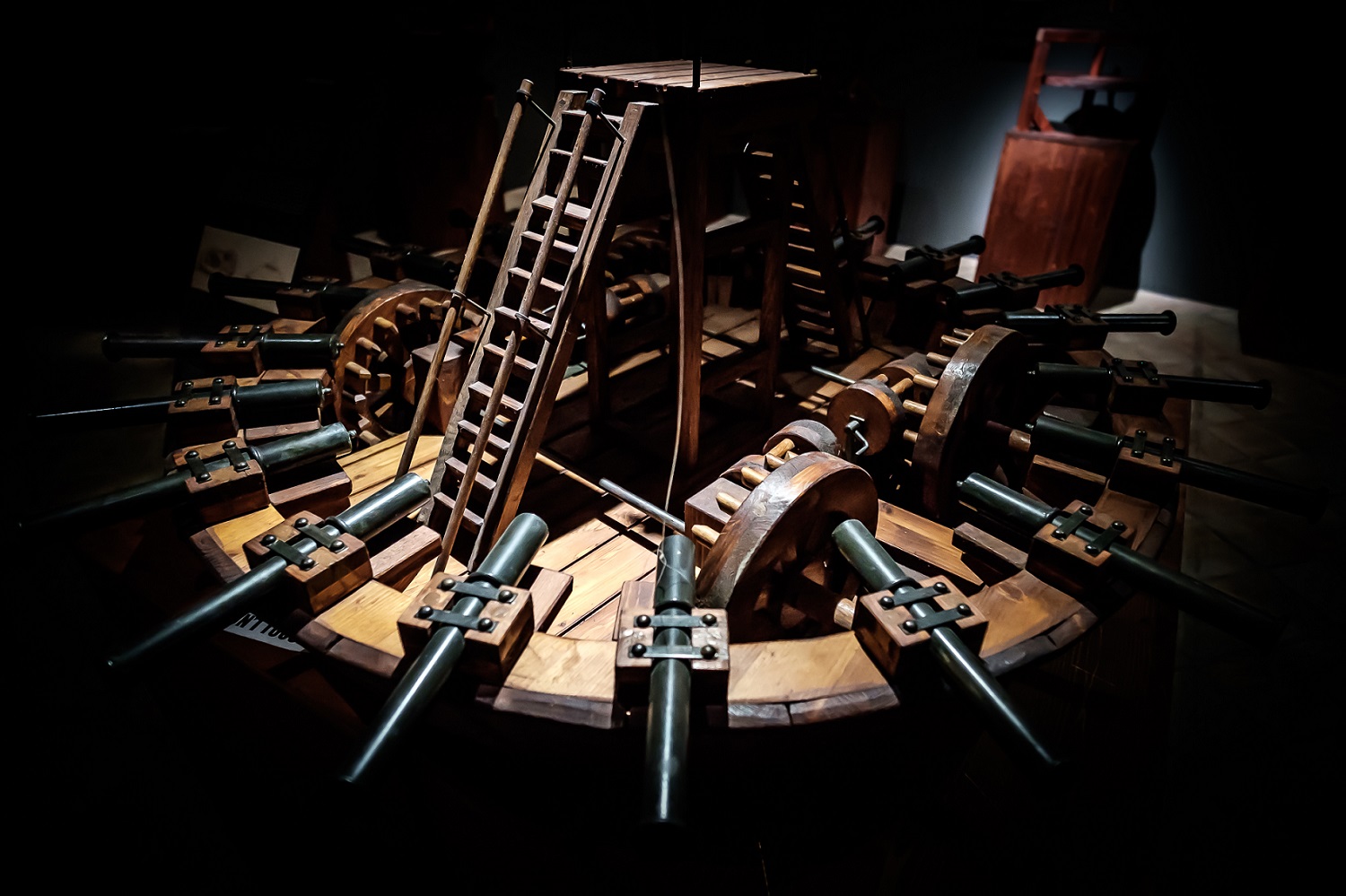 The Museum is accessible to the visually impaired. With the possibility to Touch.

As protocol stipulates in the agreement with the association “Turismo per tutti”, has enforced and guaranteed access to the physically impaired, with an additional tangible path reserved for the visually impaired. It is our goal to allow access to the museum and Leonardo and Archimedes machines allowing everyone a source of inspiration and culture.

Seeing with the use of your hands is possible. The machines have been constructed to facilitate a sensorial exploration, touching correctly so that the details are tangible, A museum without barriers, because all forms of art must be accessible.

Great and singular work has been carried out with minuteness by skilled workers. Artisans of Florence, have been able to restore life to the realization and the faithful reproduction of Leonardo’s machines, all working in detail and rebuilt with special procedures. The models reproduced,which cannot certainly be defined as only “models”, were rigorously made entirely in wood, metal and cordage pertaining to that era, for this commitment it required sophisticated technologies and special human abilities.

The “machines” displayed at the Museum of Leonardo Da Vinci and Archimedes of Syracuse, also have the distinction of being interactive, which is a fundamental aspect to arouse the visitor not only an intense experience sensory perceptual and cognitive, but also, through direct contact with the “Leonardo’s material”. The value and importance of cultural and scientific views of the museums would like to draw the interest of the general public, by the pupils of primary schools of first and second grade, teachers and students of universities; to lovers of mechanics and kinetics, historical buffs and more generally to the Italian and foreign visitors admirers from scientific-cultural event. Next to each machine is affixed a panel with an explanation in multi-languages.

The Museum Leonardo and Archimedes of Syracuse was created for children:

In addition, the Leonardo Workshop “W Leonardo”, set up inside the museum bearing the same name in Syracuse, will allow to assemble some of the machinery and experience the building of some models present on display.

The Museum is not reserved for just adults, but also for children, our didactical project “W Leonardo” where children from 3 to 12 years of age have the possibility to comprehend the raw materials that constitute the machines, basics of mechanics, rudimental physics and scientific discipline, without neglecting an approach to aerodynamics, Leonardo being the forefather. In the workshop manual activities, for small and big ages, reconstruction of models present on display, drawings and designs to trace Leonardo’s footsteps in his attentive observations of nature that surrounded him.

Inside the museum it is possible to view on widescreen, a documentry about the life and work of Leonardo, scheduled by the administration of the museum.

The museum of Leonardo Da Vinci and Archimedes of Syracuse has the largest exposure of the Machines of Leonardo accurately reproduced on the basis of the Da Vinci Codes, uniquely in Sicily and from Florence moving south. On display we can admire 60 works and a significant collection of anatomical studies, testifying the obsession of Leonardo for the mechanics of the human body.

The superb and unique activity of the museum is endorsed by the supervision and accreditation of Prof. Carlo Pedretti, international expert of the Da Vinci Codes and director of the center “Armand Hammer” at the University of California and at the European headquarters of the University of Urbino in Italy.

There are several inventions exposed of the mythical Archimedes, to name a few, the spiral, the cochlea. A well defined and detailed special museum tour that compares and confronts the fifteen working machines, dedicated to engineering, scientific and mathematical studies of two geniuses, two pillars of science United by love for knowledge and understanding.

Archimedes the Ancient Genius was able to combine technical work and experimental research. Leonardo’s greatness derives from having comprehended with little material available the scientific methodology of the great genius from Syracuse.

If Leonardo da Vinci is the universal genius so acclaimed throughout the world, he owes his fame to Archimedes from Syracuse.

The collection at the Museum of Leonardo and Archimedes of Syracuse, is an example of the international level of studies and work on the models of the collection.

Syracuse is a suggestive location, located in the oldest part of the city of Archimedes, one of the city’s most important buildings. The former convent of retreat located in Ortigia, the curtain rises on the music of that time, between period clothes and mysterious mechanisms, for those who want to deepen their knowledge or browse through the codes of the two greatest Geniuses of all time such as Leonardo Da Vinci and Archimedes.

A book shop of worthy publications, offering a opportunity to purchase gadgets, and all types of items pertaining to the two cardinal figures of the exhibit Leonardo da Vinci and Archimedes Syracuse.

A unique experience that embraces history, science, mechanics and physics.